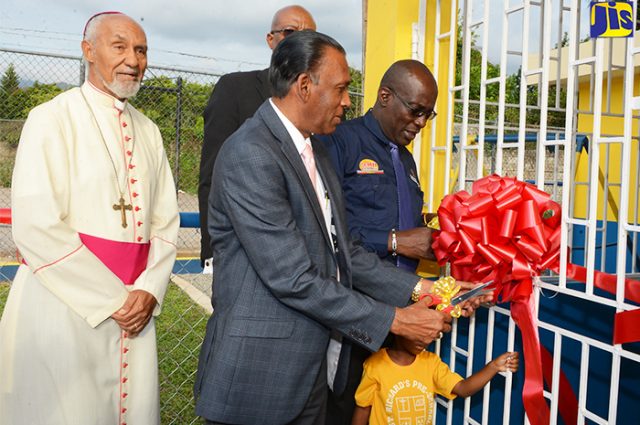 JIS: The St. Richard’s Early Childhood Education Centre in Kingston has been expanded at a cost of $13.2 million provided by the Culture, Health, Arts, Sport and Education (CHASE) Fund.

Play equipment was also purchased for the young students.

The two new classrooms and bathroom were dedicated at a ceremony held on March 9.

In his address, Minister of Education, Youth and Information, Senator the Hon. Ruel Reid, commended the school Board and other stakeholders for their effort in catering to the learning needs of the students.

“St. Richard’s Early Childhood Centre has had an impressive record of partnerships and should be improved upon and certainly borrowed by more institutions of learning. It is a model of cooperation by the Ministry, CHASE Fund, its Parent-Teachers’ Association (PTA), staff and the school Board,” he noted.

Meanwhile, Chief Executive Officer (CEO) of the CHASE Fund, W. ‘Billy’ Heaven, noted that the Fund, which has donated some $37.4 million since 2005 towards the development of the St.

Richard’s Basic School, remains committed to the development of the early-childhood education sector.

“We at CHASE view early-childhood education as an investment… . It allows for better citizens, workforce and less crime in the society,” he said.

He pointed out that the school’s new facilities will contribute to certification requirements of the Early Childhood Commission (ECC). The school is poised to receive full certification this August.

CAPTION: Minister of Education, Youth and Information, Senator the Hon. Ruel Reid (right) and Chief Executive Officer of the Culture, Health, Arts, Sport and Education (CHASE) Fund, W. ‘Billy’ Heaven (second right) cut the ribbon to open two new classrooms constructed at St. Richard’s Early Childhood Education Centre, Kingston, by the CHASE Fund. The ceremony was held on March 9. At left is Acting Pastor for the St. Richard’s Catholic Church, His Grace, Archbishop Emeritus Donald J. Reece and in the background is His Grace, the Most Reverend Kenneth Richards, Archbishop of Kingston.

Math 1 - 3 Scope and Sequence National Comprehensive Numeracy Programme NCB Maths Project Scope Sequence of Content The performance of our students in Mathematics continues to be a concern for all Jamaicans. One of the guaranteed strategies which can...
read more