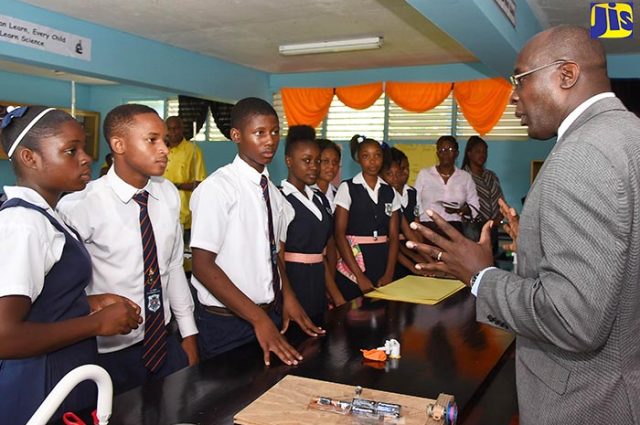 JIS: Education, Youth and Information Minister, Senator the Hon. Ruel Reid, says that students who damage, lose or fail to return the texts provided under the Government’s secondary-school book rental scheme will be required to pay for them.

He said further access to the scheme will be denied until payments are made.

He noted that the Ministry replenishes the stock of books at institutions each year through a routine system of incremental replacements for those that have deteriorated and are deemed beyond further use.

“So, we try to provide schools with what we call a ‘top-up’, which is (about) 20 per cent (of the books) each year. So after five years, your whole stock would have been replaced,” he explained.

The Minister said it was “unfair” for persons accessing the benefit to take the books and either damage, lose or fail to return them.

“We can’t have a system where students (either) don’t return books (or) they are damaged and then the Government is required to replace them each year. This is one area, unfortunately, I will not support,” he added.

Senator Reid said the Ministry is prepared to give consideration to compensatory arrangements for parents unable to pay for damaged or lost books.

“There has to be some responsibility, or they (students) can’t access the rental for the next period,” he reiterated.

The meeting formed part of Senator Reid’s itinerary for his visit to St. Mary, during which he toured several schools comprising the Ministry’s Region Two to mark the start of the 2017/18 academic year.

CAPTION: Education, Youth and Information Minister, Senator the Hon. Ruel Reid (right), addresses students of St. Mary Technical High School in Richmond, St. Mary, after touring the institution’s chemistry laboratory, which was renovated at a cost of approximately $1.8 million by State oil refinery, Petrojam. The school was one of several in St. Mary comprising the Ministry’s Region Two that were visited by Senator Reid as part of a tour of institutions to mark the start of the 2017/18 academic year.

Links to Other Resources