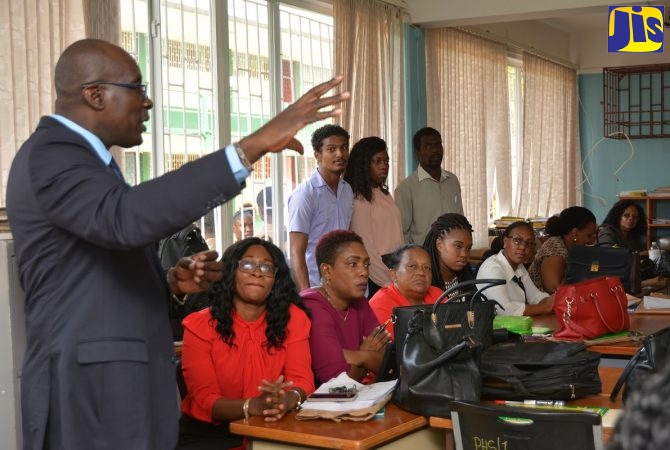 JIS: Minister of Education, Youth and Information, Senator the Hon. Ruel Reid, has called on teachers to work with the Ministry to tackle the issue of indiscipline in schools.

Senator Reid, along with top officials from Region Four, visited the Little London, Grange Hill and Petersfield High schools in Westmoreland, on January 7, where he met with teachers to discuss issues facing the institutions.

The Minister told the teachers that he is aware of the social issues plaguing high schools in the parish, which he believes have spilled over from the community level.

“ Westmoreland and indeed Region Four have been having some challenges. When we did some checks over recent times, the report we got was that Region Four and Montego Bay have one of the highest rates of absenteeism from school,” he said.

In this regard, the Minister encouraged teachers to work with the Ministry and other stakeholders to develop strategies to tackle behavioural challenges among students and provide the requisite interventions to reform problem students.

Senator Reid said that while indiscipline must not be condoned, the teachers should not turn their backs on students with behavioural challenges but instead work to manage and alter the behaviour of those students.

“Through salvation and education, I believe we can transform the lives of every one of our young people. We are not going to tolerate their indiscipline or misbehaviour, but we are not going to give up on any one of them. Where the Ministry needs to intervene and where we have to allow them to go elsewhere to be rehabilitated, fine. It’s not that we are giving up on them, but school must go on,” the Minister emphasised.

In the meantime, Senator Reid informed educators at the Little London High School that the Ministry will be equipping the school with additional guidance counsellors to help curb the behaviour of difficult students.

He also assured the principal and staff at each institution that the Ministry will continue to give support and direction to the schools, as they work to carry out the mandate of the Ministry.