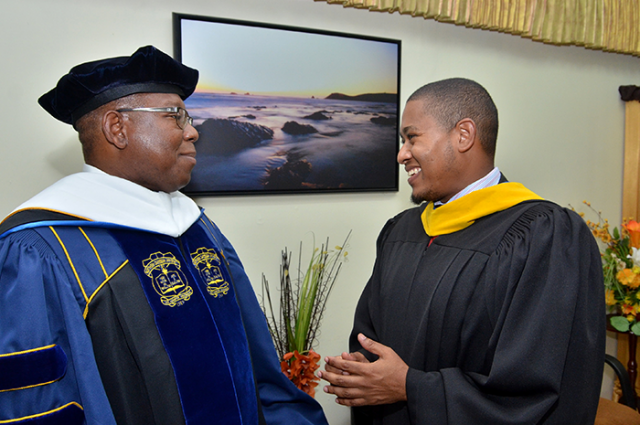 Noting that this is part of his ‘Jamaican Dream’, Mr. Green said the country needs its brightest people to serve in Government.

The State Minister, who was addressing the Honours Convocation ceremony at the Northern Caribbean University (NCU) in Mandeville, Manchester, on October 19,     noted that he got involved in politics because he wanted to make a contribution to this very important area of national development.

“Consider what would happen in a country where the best and the brightest don’t get involved in politics. Just who would get involved?” he asked.

Other aspects of his Jamaican Dream include encouraging tertiary-level students to start youth clubs in their communities to reach vulnerable youth, and for universities to incorporate mentorship programmes for high schools with students serving as mentors.

Meanwhile, the State Minister pointed to the need for more Jamaicans to pursue tertiary education.

“The reality is that tertiary education is critical; it is no longer optional. It is no longer hard to become a tertiary graduate; we now have online universities, so we have to get more of our young people trained up to the tertiary level,” he said.

He noted that the Government has made it easier for students to access tertiary studies, by lowering interest rates on loans from the Students’ Loan Bureau (SLB).

“We have reduced the interest rates on students’ loans from 9.5 per cent to six per cent for Pay As You Study (PAYS) loans. We also reduced the interest rates on postgraduate loans from 13 per cent to 9.5 per cent, because you cannot just stop at a first degree in this new world. We have also started to calculate your loans on a reducing balance method, which lowers the amount to be repaid,” Mr. Green pointed out.

He said there are also lower rates for areas of study that are directly related to the Government’s growth agenda.

Mr. Green said the Government is looking at lengthening the number of years that graduates would have to repay their loans, as it is recognised that it may take some time for persons to find a job.

The State Minister lauded the NCU for having produced some of the finest graduates in Jamaica.

“I have found that the NCU graduate is much more equipped to take on the working world. I have come in contact with a number of your media graduates and find them to be very professional, honest and hard-working, so you are clearly doing something right at NCU that needs to be emulated,” he said.

He encouraged the students to “maintain your commitment to academic excellence while seeking ways to be of service to your community and the wider nation.”

He cited the United Students Movement as providing a platform for young people to give service.

“I also encourage you to dream big, broadly and ensure that you do all you can to achieve your dream,” he added.

The State Minister noted that the Government has big plans for Mandeville to become a university town, and NCU is critical to achieving that goal.

CAPTION: State Minister in the Ministry of Education, Youth and Information, Hon. Floyd Green (right) is in light conversation with President of the Northern Caribbean University (NCU), Dr. Lincoln Edwards (left), just before the start of the Honours Convocation ceremony on the grounds of the institution in Mandeville, Manchester, on October 19

The Budget Unit coordinates the preparation and management of the Recurrent Budget.  It proposes all the supplementary costing consequent on re-grading, reclassification and reorganization for Teachers, Administrative, Executive, Clerical, Ancillary and Accounting staff throughout the Ministry of Education and its...
read more