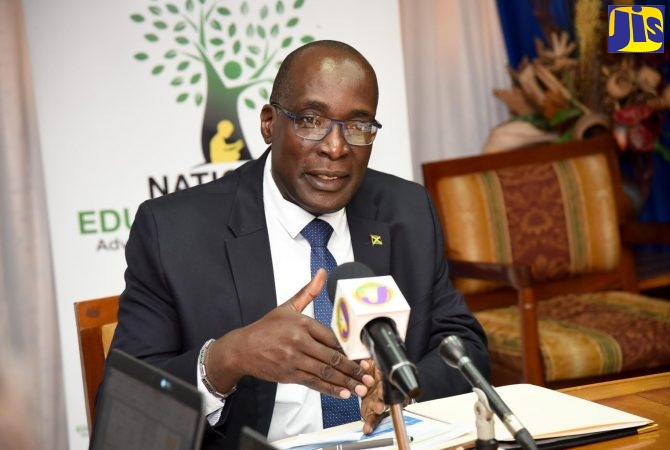 JIS: The Government will be constructing 17 new schools at locations across the island to provide adequate and comfortable infrastructure for students and teachers.

Of the total, 10 will be primary institutions while the remaining seven will be secondary schools.

Minister of Education, Youth and Information, Senator the Hon. Ruel Reid, who made the disclosure at a press conference at the Ministry in Kingston on Tuesday (February 5), said that the submissions for the undertaking have been made to the Public Investment Management Secretariat (PIMSEC).

“We have submitted our 17 schools to PIMSEC, which is now a requirement for all government capital expenditure… and as funds are available, the projects will be approved,” he said.

The Minister, who was giving an update on school infrastructure projects, said that new institutions are needed in Montego Bay, St. James and other areas “right across the country”.

“In Manchester Northeastern, at both Mile Gully and Christiana High (there are) deficits; also at Holmwood. In all those areas, we need more schools. We have primary schools such as May Pen Primary (in Clarendon), which is the largest primary school in the Caribbean, and it is on shift. There are lands in the Clarendon area,” he said.

Senator Reid noted that the additional schools will “provide adequate infrastructure to make our children comfortable in the teaching and learning environment”.

“We have to make sure there are enough publicly funded institutions, so that no child will be left behind. All our children will have a seamless opportunity to pursue their education unhindered with full State support up to age 18, leaving with an associate degree,” he said.

Meanwhile, Senator Reid informed that close to $2 billion has been spent on school infrastructure and maintenance since 2016.

He said that over the past two and a half years, the Government has undertaken a massive infrastructure renovation and development programme, which has significantly improved the learning environment for students.

Additionally, he said that since 2018, a total of $888 million has been allocated to 381 schools to undertake critical repairs, with the bulk of the figure going to primary institutions.

These include roof work, renovating bathrooms, tiling of classrooms, repair of fencing, windows and doors, installation of whiteboards, among other things.

Senator Reid said that $738.6 million has been disbursed to carry out repairs by way of service-level agreements. “We cost the project, we send the money into the bank accounts (of the schools) and we have an agreement in terms of how those funds are to be expended,” he noted.

Furthermore, Senator Reid said that approximately $97 million has been spent for the completion of 35 new flush toilet systems, with procurement and additional works in progress for 16 others.

Just over $121 million has been allocated under the ‘Capital A’ budget to remove pit latrines in 51 schools.

Senator Reid said the National Education Trust (NET) has been one of the lead agencies in terms of school infrastructure upgrade.

The NET has been prioritising early-childhood care and development, safety and security, increasing uniformed groups as well as the provision of clean water to schools.

CAPTION: Minister of Education, Youth and Information, Senator the Hon. Ruel Reid, provides an update on school infrastructure projects during a press conference at the Ministry’s Heroes Circle offices in Kingston on February 5.