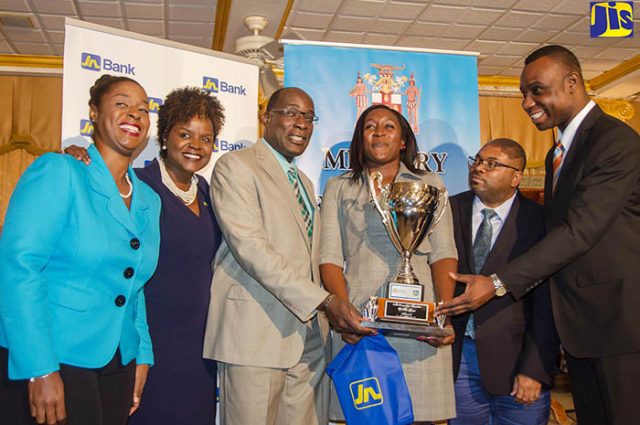 JIS: Neisha Grant Lawrence, teacher at the Crescent Primary School in St. Catherine is the Mathematics Teacher of the Year.

She was presented with her award by Minister of Education, Youth and Information, Senator the Hon. Ruel Reid, during the launch of Mathematics Week at the University of the West Indies (UWI), Mona Visitors’ Lodge on March 6.

Her prizes include a one-year membership to the National Council of Teachers of Mathematics (NCTM), which is the world’s largest organisation concerned with mathematics education, as well as a trip to San Antonio for the NCTM 2017 Conference. She also received an Apple iPad.

Mrs. Grant Lawrence said she was grateful to God, humbled and filled with joy to be the recipient of the coveted award.

“I would like to register my gratitude to the Ministry of Education, more specifically the National Mathematics Team, for implementing such a competition, giving me this great opportunity to demonstrate my mathematics skills outside the walls of my school,” she said.

She said her journey started when the Ministry implemented a programme for the training of School-based Mathematics Teachers (SBMT) at the primary level to improve the performance of students in the subject.

“My principal thought I was the best person for the task, despite my unwillingness, and like many, I feared mathematics from childhood. My principal, seeing the great potential in me, persisted, and I went ahead teary eyed, still reluctant; but look at me now,” Mrs. Grant Lawrence noted.

“Students at my school are understanding mathematics and are having fun while learning. It is my will to see… mathematics (become) the top-performing subject in both primary and high school.

I know all the participants in this competition and other mathematics teachers will see to that,” she said.

She also expressed appreciation to her students, Principal, Iris Lewis and family members, who, she noted, were a constant source of motivation and encouragement.

Other finalists in the competition were Leesan Salmon of the Aabuthnott Gallimore High School; Tarique Tomlinson, from the Godfrey Stewart High School; AnnMarie Plummer Wright of the Bethabara Primary School; and Rosemarie McFarlane Morris of St. Catherine High School.

The contestants were observed teaching mathematics lessons by members of the regional and national mathematics teams as well as education officers. They were also interviewed by a panel of judges on mathematics teaching and learning.

Participants were also tasked to prepare an action plan that they would share with their principal to treat five of the issues identified in the National Education Inspectorate Report in respect to mathematics. Individuals were scored based on these interactions.

The Mathematics Teacher of the Year Award is in its fourth year and is sponsored by Jamaica National (JN).

Senator Reid extended special thanks to the financial institution for its support of the competition since its inception in 2013.

For his part, Permanent Secretary within the Ministry, Dean-Roy Bernard, congratulated the 2017 Mathematics Teacher of the Year.

“I say thank you for your continued good service to the people of Jamaica,” Mr. Bernard said.

The Ministry is observing March 5 to 10 as National Mathematics Week under the theme ‘Math Counts’.