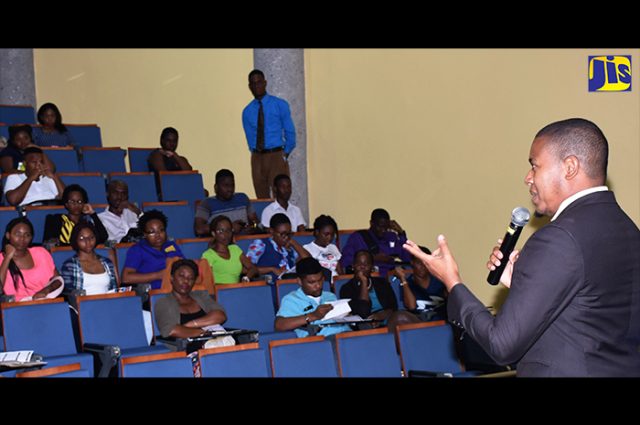 JIS: The Ministry of Education, Youth and Information is ramping up its career guidance programme, which is expected to produce school-leavers who are better prepared for the 21st century job market.

Minister of State in the Ministry, Hon. Floyd Green, says the programme will provide secondary-school students with critical information on the skills required by the job market, which will help them make more informed career choices.

The State Minister was speaking at an information session hosted by the University of the Commonwealth Caribbean (UCC), at its Worthington Avenue premises in St. Andrew, on August 7.

“What you find oftentimes is that our young people are still unaware of the present-day realities in relation to the world of work and in relation to the society which we now live in, and how quickly our society is evolving and the fact that some of the jobs that we clamour after now, by the time you are finished with university, those jobs won’t be around,” he said.

Mr. Green noted that while old jobs are becoming extinct, new jobs are being created that, oftentimes, students seem to be unaware of. “We have to strengthen our career guidance…the reality is there are a lot of exciting professions out there,” he added.

In the meantime, he reiterated the Ministry’s drive for the full establishment of seven-year high schools, so that more students can continue their training through the traditional sixth form and the Career Advancement Programme (CAP).

“In the modern world, just finishing high school with CXC subjects is not enough; it doesn’t work anymore. The world now needs people with skills – certifiable skills. So, the certification has become so valuable, you can’t stop at the secondary level,” he emphasised.

He hailed the leaders of UCC for their visionary outlook, which has seen them continually finding new avenues to increase access to tertiary education.

Under the agreement, UCC will partner with CXC to deliver the associate degree programmes across the island. Additionally, the UCC and CXC will allow applicants for the UCC academic programmes to have their CXC qualifications sent directly to the university, even before their formal release to the local CXC offices.

The UCC and CXC will also be jointly establishing a Student Advising and Career Centre at UCC’s main campus in Kingston, for the benefit of CXC students who are not linked to an educational institution, but who require academic and career guidance and mentoring.

CAPTION: Minister of State in the Ministry of Education, Youth and Information, Hon. Floyd Green, addresses an information session hosted by the University of the Commonwealth Caribbean (UCC) at its Worthington Avenue premises in St. Andrew on August 7.