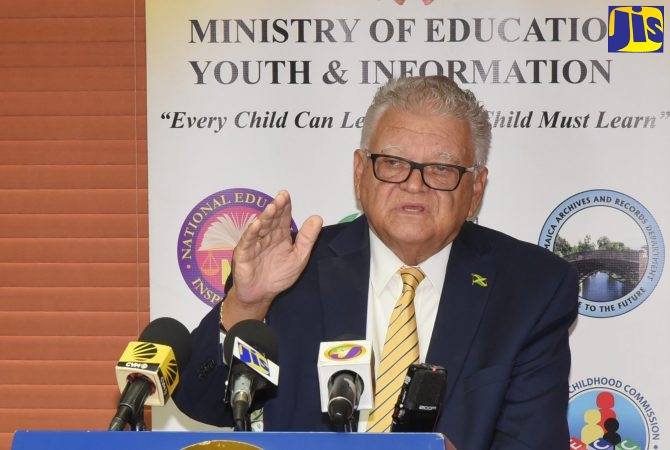 JIS: The Ministry of Education, Youth and Information is reporting an overall improvement in passes for students, who sat the Caribbean Secondary Education Certificate (CSEC) this year, when compared to 2018.

Minister without Portfolio, Hon. Karl Samuda, in presenting the preliminary report during a press conference at the Ministry’s National Heroes Circle headquarters on Wednesday (Aug. 14), said that higher scores were recorded in 23 of the 34 subjects taken.

Mr. Samuda said there were also improvements in the sciences and some mathematical- related subjects, with integrated science having the highest percentage increase of 22.7 per cent.

CAPTION: Minister without Portfolio with responsibility for Education, Youth and Information, Hon. Karl Samuda, presents the preliminary report for 2019 Caribbean Secondary Education Certificate during a press conference at the Ministry’s offices at National Heroes Circle on Wednesday (August 14).

Minister of State (with responsibility for youth)

THE HONOURABLE ROBERT NESTA MORGAN, MPMINISTER OF STATE WITH RESPONSIBILITY FOR YOUTH The Hon. Robert Nesta Morgan is the Minister of State in the Ministry of Education, Youth and Information.  He was formerly a Senator and Parliamentary Secretary in the...
read more