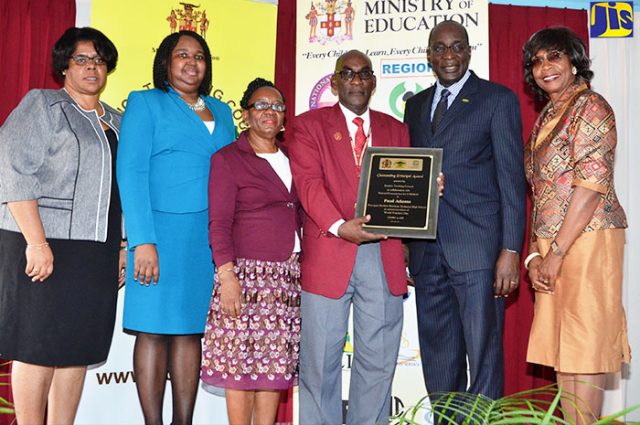 Mr. Adams, who has been at the helm of the Bogue-based institution since 2002, was presented with the award by Education, Youth and Information Minister, Senator the Hon. Ruel Reid, during a ceremony at the school on Wednesday (February 8).

He is the sixth Principal to have copped the award since it was established in 2011.

Speaking at the presentation ceremony, Senator Reid commended Mr. Adams on his hard work and vision, which have placed the institution among the elite group of high-achieving schools in Jamaica.

He noted that Mr. Adams has not only served well as a Principal, but as head of the Jamaica Teachers’ Association (JTA).

“We need radical thinking and transformation and Mr. Adams has been a visionary and what we see now is an expansion of opportunities beyond grade 11 to having students in grades 12 and 13,” he pointed out.

He added that the work of Mr. Adams and his team at Herbert Morrison has ensured that students are prepared for the fourth industrial revolution, which will place greater focus on technology and will require a highly trained, skilled and certified labour force.

“What I have said in simple terms is that we want all our students now to have education extended to at least age 18…Herbert Morrison is very much in sync with the global trends for the fourth industrial revolution,” Senator Reid said.

Meanwhile, Mr. Adams dedicated the award to his academic and ancillary staff as well as the 1,200 students.

“You would have recognised that the details of the reasons for the award are not encompassed within the leadership only of the Principal, but the individuals who make the team happen in their particular ways,” he said.

Mr. Adams said the award adds value to the school, which is celebrating its 40th anniversary this year.

The Outstanding Principal’s Award was introduced in collaboration with the National Commission to the United Nations Educational, Scientific and Cultural Organization (UNESCO) with the main objective of showcasing the approaches, strategies and outcomes of effective school leadership.